Jumped in the car just around 0900 to drive down to KokkoL.A. , managed to pick up Tony & Tommy on the way. We took turns driving and it didn't seem too long before we arrived, but not before picking up some wine from the local Alko. Upon arrival, Elias and Tero (yeah, a special guest appereance at the sessions) were already at the studio. We all went out for a late lunch before resuming work. First off was a short drum thing with another drumkit....from there we started to work on the guitar setup and getting the sounds right, spent the whole evening (actually Elias and Pasi did) tuning the guitar stuff. Tomorrow will be a guitar day to remember. At some point Elias filmed me explaining my studio rig...it turned out a bit dark but then again we're doing heavy metal so why not ?

Btw as it was Monday, it was once again time for the "grillilautanen" for lunch but I think I better change that for next week. Gotta run down and check out where the guitar sound
is heading ;-) 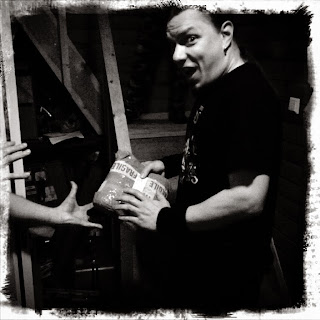 Elias receiving a mystery package to help him do the guitars ;-) 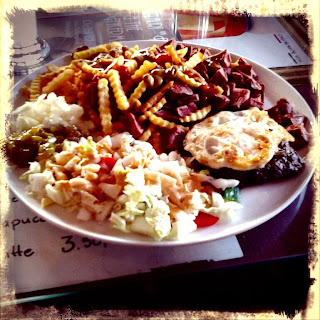 What I ate today part 6: The return of the Evil Grill Plate